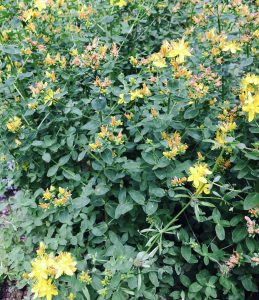 I’ve been interested in St. John’s Wort (Hypericum perforatum – if you hold a leaf up to the light you can see the tiny holes or perforations) since I was studying for my first degree in Psychology in the 90s and it ended up as the subject of my final year dissertation. As with many herbs there is plenty of folklore surrounding its common name. One theory is that it tends to flower around the time of St. John the Baptist’s feast day, June 24th; another is that the red stain when you crush the yellow flowers signifies the blood of St. John, who was beheaded. In days gone by, people used to hang a fresh sprig over their beds as they slept to see if they would live for the rest of the year – if it wilted overnight then it was bad news! A similar test was used by young ladies to see if they were likely to find a husband…

Most people have heard of St. John’s Wort (SJW) as a herb for depression. Many studies have found that it can be as effective as orthodox antidepressants in the treatment of mild to moderate depression – in fact, in Germany it is routinely prescribed by GPs. SJW is thought to work on the neurotransmitters in the brain in a similar way to orthodox antidepressants, but doesn’t appear to have the same side effects that often put people off these. It is particularly beneficial in SAD and also irritability, PMS, anxiety and nervous exhaustion.

SJW isn’t only for mental health issues though. It has many other properties that make it a herbalist’s favourite – it protects and helps regenerate damaged nerves and works as a painkiller (particularly when applied directly to the affected area) in sciatica, shingles and toothache. SJW is also antiviral (and antibacterial) and helps with shingles in this respect too – and is very effective in the treatment of hepatitis. And the anti-inflammatory effects help with all these conditions and more – including skin problems such as minor cuts, burns and eczema – a good cream for first aid!

As an internal medicine, I tend to use St. John’s Wort as a tincture, but it is often used as a tea as well. I particularly like to use it as an infused oil (which is a beautiful red colour) in conjunction with other herbal oils for aches and pains of various types.

St. John’s Wort isn’t a herb I would recommend self-medicating with though. It’s certainly not one I would rush to prescribe without a full consultation as it it can interact with certain orthodox medications and should only be prescribed by a qualified medical herbalist after a full medical and drug history has been taken. Over the counter supplements of SJW can also vary in quality and strength. Don’t let this put you off though! When prescribed properly, St. John’s Wort is one of the safest and most effective herbs you can take. If you’d like more information, get in touch!